Who can remember The Wind in the Willows? That classic children’s story by Kenneth Grahame has stood the test of time for a number of reasons, one of those being that absurdly wealthy and immensely proud Mr Toad of Toad Hall.

Toad was a typical tweed wearing English Toff, except he was an amphibian as you probably guessed. He would flit from one craze to another without ever counting the cost, the most notorious of these was a love of cars.

As ‘The Wind in the Willows’ took place in the very early 20th Century, the motorcar was still in its infancy but this didn’t stop Toad from being utterly smitten with the motorcar after nearly being flattened by one while out in his Gypsy Caravan. He would don all the apparel and persist in the belief he was a born driver. The results? The grounds of Toad Hall would be two stories high with broken cars.

You may be thinking, what does this have to do with the Morgan 4/4. Well, a Morgan is the kind of car I think would suit Toad to a tee. British eccentric engineering at its finest, no frills, and sports the kind of open road drive which leaves one feeling like a bit of a bounder. Anyway, more on that later.

The 4/4 was first introduced in 1936 and was surprisingly conventional as far as the brand was concerned. Peter Morgan’s company had started by making three wheeled V Twin JAP motorcycle engine sports cars. The model designation 4/4 indicated this Morgan had four wheels and the company’s first four-cylinder engine.

The Series II 4/4, unveiled in 1955, would set the template for the 4/4 style up the present day. That’s right, the 4/4 is still in production. There were a number of cosmetic tweaks and power upgrades throughout the 4/4’s production run, with examples like this 1970 4/4 1600 sporting the longest run between model and spec changes.

Under the bonnet, or bonnets in this case, as Morgan owners and work on the car by lifting either side of that long engine covering, sits a Ford 1600cc four cylinder Kent engine with 95hp mated to a four speed manual gearbox. Morgan also offered a four-seater variant of the 4/4, which this example is one.

I will admit, I have always been a huge fan of automotive oddities and brands which have their own individualistic take on what a car should be. As a result, I have always had a soft spot for Morgan, but never having driven one until now.

As it was a sunny day in North Canterbury, I was dead keen to get topless. Oh, and take the roof off of course. As the full roof was in place, it required disassembling it and leaving it behind. There is no single switch power operated droptop here.

Plus, when you have the roof off, the 4/4 is at its best visually. In fact, If I had one of these, I would seldom drive it in the rain anyway. Especially since the 4/4 is far better looking with its roof off than with it on.

Open the door, which feels more like a cat flap and slide yourself in. With the windscreen being the only window to speak of, you do feel rather exposed. The dashboard is all about elegant simplicity. All the bits you need, and no extra gizmos to distract you from the drive.

The dash itself comes out at you quite close, resulting in that beautiful three spoke wood rim steering wheel being very close to your chest. Sitting in the 4/4 offers the faintest whiff of a pre war Grand Prix car with and extra seat.

Turn the key next to the rev counter and the four pot starts first pop. The transmission tunnel is quite close to your legs so reaching for first gear is dangerously close to grabbing one’s own knee.

Moving off and that sweet burbling four pot crackles away as I navigated my way onto state highway one. A firm press of you right shoe and the Moggie gets up to the national open road limit with relative ease. Sure, its not fast, but the nature of the power delivery is simply delightful.

In top gear at 100km/h the 4/4 holds its own rather well. Yes, you do feel rather exposed with massive trucks and towering hatchbacks flying by, but you are probably still having more fun than they are.

The Morgan 4/4 is all about driving and being driven hard. It is a car which you have to drive and get involved with to get the best out of it. The gearbox, despite being close to your legs is like a bolt action rifle and is very satisfying to use.

In fact, I found myself changing down from fourth, down to third, and back to fourth again, just for the hell of it. Once in third, it pulls quite strongly right up the 6,000rpm redline. Though sometimes the gauge needles have a tendency to bounce around, so its hard to tell whether you are doing 80 or 110 km/h. The leather seats are comfortable but you do bounce around in them from time to time.

The Morgan 4/4 feels like it weighs next to nothing. The results of cornering are as you would imagine, the 4/4 is very light on its feet. You have to be on point with steering input, but the rewards for getting it right are substantial.

The brakes require a firm foot but it isn’t long before you are on the power again, with that raspy four pot beautifully on song as you bound out of the bend. The 4/4 is just such a happy and playful car.

After my drive, I am even more convinced that Toad will be very much at home in a Morgan. That said, he may go whole hog and get a V8 Plus 8. However, the 4/4 would be a great introduction for him to one of the most eccentric brands in motoring.

A Morgan is not everyone’s cup of tea, and they never will. However, I challenge anyone to drive a Morgan 4/4 and not be entertained. It is nothing less than a simply smashing motor. 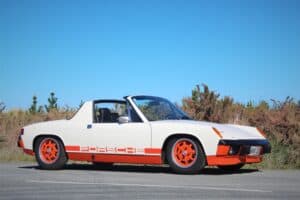 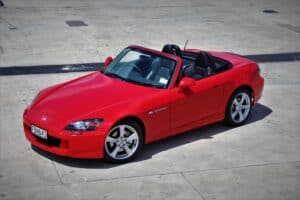