The late fifties were a time of change for the British Motor Industry. The Suez Oil Crisis of 1957 saw the price of crude oil skyrocket and motorists everywhere were feeling the pain everytime they filled up.

Needless to say, many people cast aside their thirstier family saloon’s in favour of smaller and more economical cars. This meant a rise in popularity of imported micro-cars from the European continent, like the Fiat 500, BMW Isetta and the radical Heinkel KR175.

This foreign invasion led to engineer Alec Issigonis to create the Morris Mini Minor, otherwise known today as what many would say as being the greatest small car of all time, the Mini.

However, when talking of size, the small dimensions of the Mini paled in comparison to a microcar made in the Isle of Man from 1962 to 1965. Designed to be a better alternative than simply walking to town, this car is officially listed as “Smallest Production Car Ever Made” by the Guinness Book of World Records. It is, of course, the Peel P50.

With a wheelbase of 1,270mm and being 98cm wide and 134cm long, the Peel P50 was simply unlike anything else on the road. Every ounce of space was uttlised to ensure most full size adults had room to sit comfortably. Peel Engineering themselves at the time said there was room for an adult an d a shopping bag. Even a certain British TV motormouth J Clarkson managed to squeeze his 6ft 5 inch frame into a Peel P50.

Power came from a DKW moped sourced 49cc single cylinder engine which produced, wait for it, 4.2hp. This was mated to a three speed clutchless manual gearbox, with no reverse gear. So if you parked your Peel nose on to a kerb, it was a matter of opening its sole door and pushing yourself back with your left leg.

You could always ask a member of the public to assist, but that would be quite embarrassing if you are leaving the pub on a Saturday night. Alternatively, because the Peel P50 only weighed in at 60kg, you could simply pick it up from the back bumper and turn it around yourself.

A well driven Peel, if there was such a thing, could achieve a dizzying 38mph flat out. However, this would greatly depend on the drivers girth and what they had for breakfast. The P50 was also seriously frugal, with combined fuel figures of 2.8L/100km. However, with only one headlight up front, it was easy for other motorists after dark to think the Peel was a bike, not a car.

All in all 47 P50’s were built during the three year production run. One was even driven by Peel Engineering around the roof of Blackpool Tower during a publicity stunt.

When new, a Peel P50 could be yours for a mere 200 GBP. Today, original examples have been changing hands at auction for in excess of 80,000GBP. Peel also dabbled with their own sports car, the Trident, which resembled something out of a futuristic Gerry Anderson production.

In 1965, Peel Engineering folded but the company was revived by David Hillman and Faizal Kahn. The “new” Peel P50’s looked identical to the origonals, but with the choice of either 50cc petrol or electric power.

The Peel P50 is one of those cult classics which makes so much sense today thanks to growing inner city congestion. Just make sure a motorway inst part of your commute. 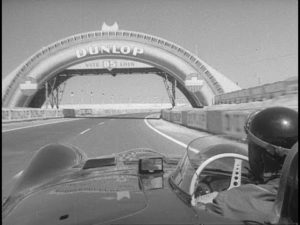