So many cars are immediately identified with members of the British Royal Family. Her Majesty the Queen was seldom ever seen with her family outside Balmoral Castle without a Land Rover, and Prince Charles loved Aston Martin.

Princess Anne however, would be associated with one particular British classic. Her keen interest in this car would lead to hear owning several over the years. The car in question was the Reliant Scimitar GTE and remains one of the most unique chapters of British car design.

The first Reliant to carry the Scimitar name was the Scimitar GT. Designed by British design house Ogle, who would go on to create one-off and limited run cars for manufacturers like Aston Martin, it was originally called the Ogle Scimitar.

Reliant bought the rights to use the small coupe and it became the Reliant Scimitar GT. Power came from either a 2.6L Ford straight six or the popular 3.0L Essex V6.

Called the Scimitar GTS, it was a design sensation and was even owned by Prince Phillip, Duke of Edinburgh. With this Royal association with car, Reliant and Ogle saw the potential for a sports car with the same shooting brake design. The result? The Reliant Scimitar GTE.

Launched at the London Motor Show in 1968, the GTE was met with Marmite reviews. People either raved about it, or they hated it. One who did rave about it was, as we have established, Princess Anne.

She was given one as a 20th birthday present in 1970 and went on to own a further eight Scimitar GTEs. She was such a fan of this shooting brake sports car she even visited the Reliant factory in 1975 to watch her next car being built. It also said Her Royal Highness had a bit of a lead foot and was stopped for speeding several times. Despite her status, she still got fined.

Thanks in part to designer Tom Karen, Reliant had their own left-field uniqueness. If you needed any more proof of this, you need only look at the three-wheel Robin and Regal van.

The GTE looked like no other British car of the time. Its elongated rear with glass tailgate was eventually mimicked slightly by the Volvo P1800ES four years later.

The GTE greatly outsold the GT coupe. So much so that Reliant management decided to pull the plug on coupe production and focus entirely on the GTE. The first Scimitar GTEs were the SE5 and SE5a, but in 1975, the SE6 was launched.

The 3.0L Ford Essex V6 with 110kW and 254Nm of torque was the only engine option but buyers had the choice of either of four speed manual with overdrive or a Borg Warner three-speed automatic. Many Scimitars were optioned with the manual gearbox.

The SE5 and later SE6A had their chrome bumpers and wire wheels replaced with black rubber ones. The headlights were also changed and the whole car looked much less dainty than before. The interior was also more upmarket despite Reliant having a rummage around the parts bin of other manufacturers like Vauxhall and Ford for switchgear.

Reliant also produced a convertible version called the GTC from 1981 and the Essex V6 was replaced by Ford’s 2.8L Cologne V6. By the eighties, the Reliant brand was in decline, not even the support of Princess Anne could save this brand from going to the wall in 1990. Scimitar production stopped in 1988 with Her Royal Highness getting the very last one. It was her ninth.

This 1980 SE6A was purchased by Waimak Classic Cars and as you can see, this Scimitar is far from factory fresh. While mechanically sound, the exterior needs a complete going over to bring it back to full health.

There is duct tape preventing leaks from the optional sunroof and there is a litany of scratches and other scrapes. The alloys need refurbishing and the whole car basically needs a really good tidy up. Fortunately, that is exactly what Waimak Classic Cars are going to do. However, before the job got underway, I was invited to experience this soon to be reborn Scimitar.

Hop inside and you get pretty comfortable straight away. Look back and you can see thanks to that shooting brake style, there is enough room for a couple of full-size adults in the rear. The dash is a greatest hits compilation album of late seventies British interior design. There is plenty of leather, hard plastics and simple white-on-black gauges. The wooden gear lever is wooden is positioned really nicely and is within easy reach.

Turn the key and that Essex six pot wakes up to a subdued burble. Select first gear and this Scimitar creeps forward. Give it some welly and I am amazed to find is just how sprightly the Scimitar is. Despite only producing less than 200hp, its pretty eager and you get the feeling at all times that this British oddity wants to get going.

There is quite a wide rev band for you to explore all the way to 6,000rpm and it sounds pretty raucous too. Each shift of the five-speed manual box is a joy. You can race the gears like you are at Brands Hatch. Keep the power on, work that gearbox and you find yourself bounding along at a considerable pace. Probably not as fast as Princess Anne though.

It is not really about slicing through twisty tarmac and the steering is quite light if a bit vague. However, the GTE can hold its own in the corners well enough. Its happy place is at a motorway cruise where those 235Nm can keep things ticking over nicely. Also, the power is there if you feel like overtaking. It is also remarkably comfortable.

Despite looking scruffy, there is nothing at all wrong with how this Reliant Scimitar GTE drives. It is one of those quirky classics, which thanks to royalty and a legion of cult fans and admirers, is still very much an icon.

This one just needs a good solid refurb to make it shine once again. Needless to say, I am very much looking forward to driving this car again once it has been given a new lease of life. 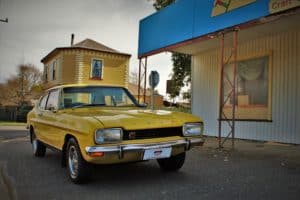 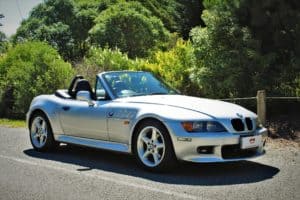 BMW Z3 Review: Its Time for This Soft Top to Shine

By Ben Selby It seems like just yesterday BMW took the covers off their idea of a back-to-basics sports car.…