Supercars. Few classes of car have captured the imagination of so many people throughout automotive history. Car fanatic or not, these cars represent the ultimate expression of what a car can be.

Whether it’s a ludicrous power output, a blisteringly high-top speed, or looks which give no regard for the practical, they are the coveted dreams for many, and priceless possessions for the fortunate few.

The Starship Supercar Show is an event which celebrated the supercar like no other before it. A collaborative effort from Giltrap Group and the Starship Foundation, the show, situated at Giltrap Group’s base at 119 Great North Road, Grey Lynn, Auckland, saw a gathering of 80 of the rarest and fastest supercars of past and present. All of which call New Zealand home.

The event was open to the public, with all proceeds from ticket sales going to Starship for children in need. “It’s a great chance for the public to see some of New Zealand’s most amazing cars coming together and all for a great cause,” says Giltrap Group and Lamborghini Auckland’s Chris Parker.

The collection of metal on display was an eclectic mix of classic supercars and the latest high end hyper cars. “The collection on display is a mix between cars owned by clients of Giltrap Group, and people who have these amazing machines tucked away that the public rarely sees,” says Chris.

Starting on the ground floor, one’s eyes were immediately drawn to Giltrap’s delivery bay, for inside sat the new and very rare McLaren Speedtail.

With 1000hp/848Nm from its 4.0L twin turbo hybrid V8, the Speedtail is the fastest McLaren ever, with a top whack of 403km/h. It also features a three-seater layout with the driver seated in the middle, a la the McLaren F1.

Only 106 will be built and this example is the only one in New Zealand. The cost? A cool $4 million NZ.

Next to the delivery bay sat a Jaguar XJ220. Once the world’s fastest production car, this 218mph big cat is a rare sight in New Zealand. Sporting the same turbocharged V6 engine used in the Metro 6R4 Group B rally car, it basked in a sea of admiring glances.

Adjacent from the XJ220 was the Lamborghini enclosure, or should that be bull pen. It housed the lineage of Lamborghini’s V12 heritage, including the Murcielago LP640, Diablo VT Roadster, a brand new Aventador SVJ Roadster, a Countach LP500S, and simply breath-taking 1967 Miura P400.

The latter of this band of raging bulls was one I couldn’t stop gawping at. It was certainly a sight to behold the lineage of a company which adorned bedroom wall posters for generations.

In the Aston Martin showroom, you could see the new Vantage, DBS Superleggera, also a very rare Vanquish Zagato, the only one of its kind in the country.

Over to the Bentley side, you would find the oldest car on display, the Bentley 8-litre. With a massive 8-litre straight six, this leviathan of the car world was one of the original cars deemed to be super. Its small wonder Ettore Bugatti described cars like the 8-litre and its 4.5L supercharged counterparts of Le Mans fame, as “the world’s fastest lorries.”

Things got even better when heading upstairs to aptly named “Hall of the Hypercar and Classics.” As the name suggests, it was just that. The classic element was nothing short of spectacular, which included a 1964 Aston Martin DB5, 1957 Mercedes 300SL Roadster, 1967 Ferrari 275 GTB/4 cam, and Ferrari F40.

Also on display was that beautiful road going D-type racer, the Jaguar XK SS. One of the nine built by Jaguar in 2016 to replace the original cars lost during fire in Jaguar’s Coventry factory, it is owned by Michael Giltrap of the Giltrap family.

The hypercar hall consisted of a new Ford GT, Lexus LFA, McLaren Mercedes SLR roadster and Ferrari SP2 Monza, the latter of which built as a modern homage to the Ferrari sports racing cars of the past, such as the 750 Monza and 500 Mondial.

Next to these was what some regard as the “Holy Trinity” of Hypercars, the Ferrari LaFerrari, McLaren P1 and Porsche 918. The only time I can remember seeing these three together in one place was a certain TV show with a Mr Clarkson, May and Hammond. So, to see them here in New Zealand together, and on Kiwi plates was incredible.

One car which was totally unique was the gold and all carbon fibre Koenigsegg Agera S Hundra. Built to celebrate Koenigsegg’s 100th production car built, this 5.0L twin turbo V8 monster with a top speed of 400km/h was probably the craziest car on display.

However, what say next to this Swedish missile was a car which many fans, young and old, were elbowing each other out of the way to see. It was New Zealand’s only Bugatti Veyron.

Also, when driven flat out with a full tank, it will run dry in 12 minutes. Small wonder the kids around me were all shouting “Look Dad, it’s a Veyron!”

Heading back downstairs, I made my way to the first of two basements where Giltrap’s more mainstream offerings where kept. However, it was great to see the new mid-engine C8 Corvette and a lovely Audi Quattro 20V.

The second bunker, sorry basement was dedicated exclusively for supercars built solely for the track. Mad Mike’s Lamborghini Huracan Drift Machine “NIMBUL” was there, with Mad Mike himself signing posters and posing for photographs with fans. F1 fans were also catered for, with the ex-Michael Schumacher Benetton B191 and Denny Hulme McLaren M23 F1 cars grabbing attention.

Also present was a ground up reproduction of the same Ferrari Dino 246 F1 car Mike Hawthorn used to win the 1958 F1 World Championship. Lastly, event sponsors, The Heart of Racing had their new Aston Martin Vantage GT3 car on display along with other toys.

How could one sum up the Starship Supercar Show? Well, hand on heart, it is one of the most incredible coming-together of dream cars for a very long time. Giltrap and Starship did a simply stellar job. The need to make this an annual event is certainly strong.

Seeing cars like these, of which the total value was somewhere around the $100 million mark, does something to us. It brings out the inner eight-year-old in us all. It allowed us to revert back to being a ghast with wide eyed stares at cars which many of us never thought resided in New Zealand. “Its amazing what some people have tucked away,” says Chris.

So, which car was my favourite? Well, all things considered, probably the Miura, or the Countach, or the XKSS, or the 275, or the Veyron…… 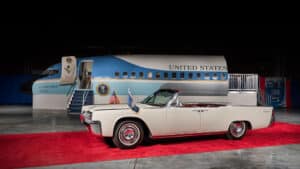 John F Kennedy’s Presidential Lincoln is Up for Grabs