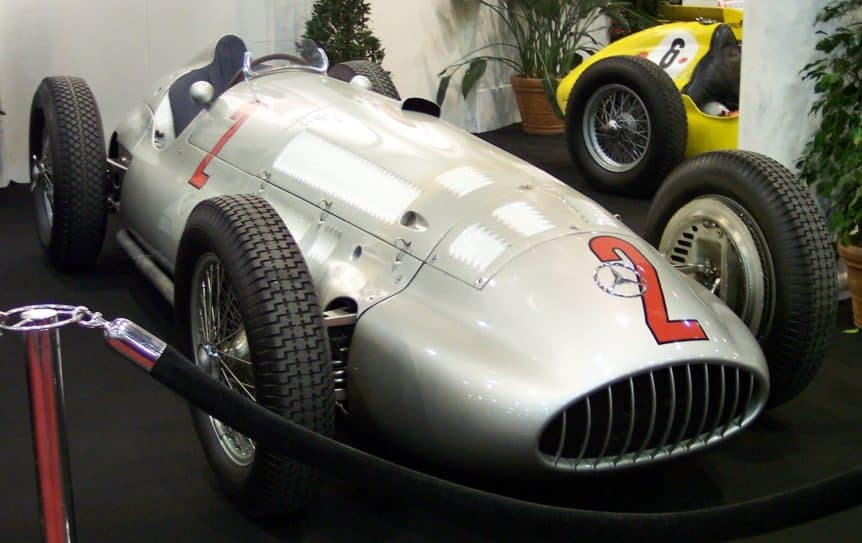 The Concours, held every year on the fairways of the Golf Club at the Ritz-Carlton Amelia Island Resort, is expected to play host to over 200 classic and collectable road and race cars for attendees to salivate over.

How the Silver Arrows name came to be, can be traced back to one event in Mercedes history, the 1934 Eifelrennen at the nortorious Nurburgring Nordschleife circuit. The aforementioned W25 was weighed prior to the start of the event, and the car weighed in a 1kg more than the weight limit of 750kg set by the race organisers.

However, Mercedes, under the leadership of the Machiavelli team manager Alfred Neubauer, found a way around the problem. The cars were painted in Germany’s national racing colour, white. However once the W25, was stripped back to bare silver aluminium, it weighed less than the 750kg limit.

The W25 won the race and a Berlin publication stated the winning Mercedes was “fast as a silver arrow” and the name stuck. Therefore, throughout the thirties, the Mercedes Grand Prix Cars, such as the W154, of Herman Lang, Richard Seamen, Manfred Von Brautisch and the great Rudolf Caracciola, were painted silver and the silver arrows were born.

When Mercedes returned to Grand Prix racing in 1954, the W196 gave Juan Manuel Fangio two World Championship titles and saw Stirling Moss win the British Grand Prix in 1955. He also famously won the Mille Miglia with Denis Jenkinson driving a 300SLR but that is another story.

Fast forward to 1989, and the Sauber-Mercedes C9 Group C Sports Racer won the Le Mans 24 hours in the hands of underrated racing talent Jochen Mass. Also, recent victories in Formula One by Lewis Hamilton is show off by the all-conquering W05 Hybrid F1 car, which has seen Mercedes dominate recent seasons of the F1 circus.