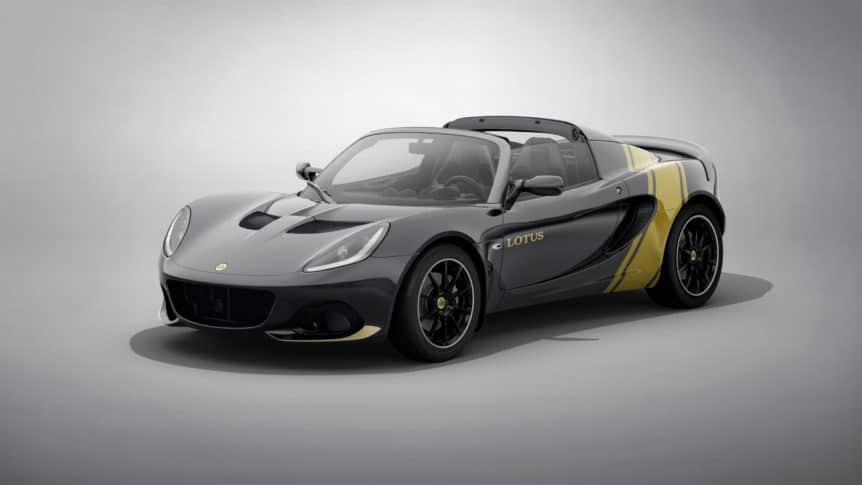 To celebrate the 60th anniversary of their first win in Formula One, Lotus have given the Elise a good dose of nostalgia with the launch of four new limited-edition versions which pay tribute to Lotus F1 glories of the past.

Officially named the “Elise Classic Heritage Editions” each of the four models available gets an enhanced exterior and interior spec over the Elise Sport 220 on which they’re based.

“Motorsport success has been at the heart of the Lotus philosophy for more than seven decades, and the Elise is our iconic roadster known around the world for its exceptional ‘For The Drivers’ performance. What better way to celebrate than by bringing these two pillars of our brand together?” says Head of Marketing Ema Forster.

The four colour schemes, black and gold; red,white and gold; blue and white; and blue, red and silver pay homage to a specific era of Lotus in Formula One. The black and gold naturally refers to the all-conquering John Player Special 72D which Emerson Fittipaldi helmed to the first of his two World Championships in 1972.

The red, white and gold pays homage to the 1968 World Championship Graham Hill Gold Leaf 49B. The blue and white references the Rob Walker 18 which Stirling Moss used to score the first Lotus victory at the Monaco Grand Prix in 1960. Lastly, the blue, red and silver harks back to the short-lived Essex Oil sponsored 81 of Nigel Mansell.

This is nothing special in a normal car but for an Elise, luxury. Options include a fiberglass roof and lightweight titanium exhaust.

Just 100 cars will be made and are available through Lotus dealers worldwide while stocks last. The want for one of these is strong.