This years marks the 50th birthday of one of the most beautiful of all seventies Italian sports cars, the Lamborghini Urraco.

First shown at the Turin Motor Show in late October 1970. The Urraco was Lamborghini’s answer to the likes of the Porsche 911 and the Ferrari Dino. Ferruccio Lamborghini saw potential in creating an entry level Lamborghini to sit alongside the flasghip Miura and luxury Espada.

Lamborghini Chief Technical Officer and engineering genius Paolo Stanzani, who also worked on the Miura and Espada was on hand to deal with chassis design while Bertone’s Marcello Gandini penned those beautfiul wedge shaped lines.

The Urraco was built as a 2+2 and was the first Lamborghini not to feature the iconic Bizzarrini designed V12. Under the bonnet sat a 2.5L V8 with a single overhead camshaft per bank and four lovely Weber double body carbs.

Add this together and the result in the Urraco P250 was 220hp at 7800rpm, and a top speed of 245km/h. The later P300 Urraco featured a 3.0L version of the V8 with 262hp, while the low volume Italian only market P200 saw capacity capped at 2.0L and 182hp. The Urraco was also the first mid engined production car to feature MacPherson struts front and rear.

While not the biggest seller, the Urraco is still a highly collectable and legendary Lamborghini. The creation of which led to the creation of the Sillouhette, Jalpa and modern day Gallardo and Huracan. 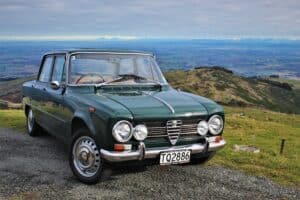